, 2018 —A gorgeous spring evening welcomed 378 graduates and their families to the 51st annual Middlesex Community College commencement ceremony on Thursday, May 24. Held outside on the scenic Middletown campus, the college awarded more than 407 degrees and certificates, including 29 students who earned more than one degree or certificate.

Among the Class of 2018 were 22 veterans, 25 foreign/international students, 148 males, and 230 female graduates. The oldest graduate was 70 years old, and the youngest was 17. The most persistent student began classes at Middlesex in 1986 and attended on and off during the next three decades before returning in 2016 to finish the necessary requirements to graduate.

The ceremony (see full video of ceremony here) was also the first one presided over by Steven Minkler, PhD, interim campus chief executive officer and dean of academics. Dean Minkler began his new role, under the former title of lead campus administrator, a year ago.

After the posting and retiring of colors and singing the national anthem, Dean Minkler welcomed the graduates, telling them, “You inspire us as you honor the road ahead.”

Dean Minkler also announced the college will award 20 associate degrees to incarcerated graduates in a separate ceremony. This Second Chance Pell grant program is in partnership with Wesleyan University.

Mark Ojakian, PhD, president of the Connecticut State Colleges and Universities system, also offered his advice to the students, telling them to “commit to the journey, not the outcome, because you never know what the outcome will be.” He added, “Look at obstacles as opportunities and create events that can define the world.” Julé Crawford, chair of the MxCC Foundation, and Merle Harris, PhD, of the Board of Regents for Higher Education, also offered greetings and congratulations.

James Lagace, originally from Meriden and a business administration major with a 4.00 grade-point average, was presented as the Class of 2018 valedictorian. This fall, Lagace plans to further his studies in finance at Quinnipiac University in Hamden, Conn.

Adrienne Maslin, PhD, MxCC dean of students, introduced two student speakers, Brittney Cotrona and Michael Perrotti. Perrotti, a business administration major with a 3.85 GPA and vice president of Phi Theta Kappa Honor Society, said,” Middlesex Community College allowed me to learn in my own fashion and be myself.”

Cotrona, an English studies major from Meriden, who earned a 3.81 GPA and was president of Phi Theta Kappa, offered her appreciation to the college and her fellow graduates for their support. She overcame difficult speech and other disabilities during her life. “I chose to take the opportunity to challenge myself and further improve my communications skills through leadership opportunities.”

Broadcast major Sean Bechtel of Wallingford read his poem that described the Class of 2018 not the negative perception sometimes attributed to the millennial generation, but as the “nothing-is-going-to-stop-us generation.” Bechtel’s poem ended by declaring, “We are the right generation.”

Christopher Kukk, PhD, whose books are based on the idea of weaving values such as compassion into learning, civic, and business communities, told the graduates in his commencement address to “live life as passionate achievers.” Kukk is the founding director of the Center for Compassion, Creativity and Innovation, and professor of political science/social science at Western Connecticut State University in Danbury.

Class valedictorian Lagace received the Award for Academic Excellence which was presented by Dean of Administration Kimberly Hogan. This award is given to graduating students who have achieved a cumulative GPA of 4.00 and who have completed 50 percent of their requirements at Middlesex.

Michael Pazareskis of Wallingford and Lagace received the Pritchett-Taylor Scholarships presented to them by Associate Dean of Development Cheryl Dumont-Smith. These scholarships are awarded to the graduates with the highest cumulative GPA who have earned at least 30 credits at MxCC, and who have attended full-time for at least two semesters.

President Ojakian, Dean Minkler, and Harris conferred associate degrees to students in 31 different areas of study, including the first students to graduate with CSCU Pathway Transfer Degrees in communications, social work, and theater. With this transfer program, students can complete associate degrees that seamlessly transfer as juniors to any CSCU four-year college offering their major. Certificates were handed out to students in eleven areas of study.

Sharon Griffin and her husband Bill, of the Peach Pit Foundation in Durham, were recognized with the Distinguished Service Award for their work with the MxCC Foundation and by providing opportunities to members of their community who exhibit a desire to improve their own circumstances and work hard to achieve their dreams.

As MxCC parent Mary Ellen McGuire of Madison proudly watched her son John Pascale receive his associate degree in history, she commented. “My daughter Grace graduated with a criminal justice degree from MxCC last year. We chose the college because of the affordability and flexibility, and because the teachers are very helpful.” 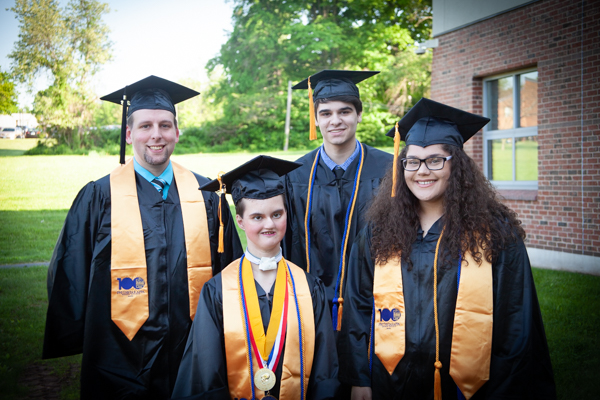